The aim here is to review the Century Versys vs1 Fight Simulator Bag. These punch bags can provide you with a thorough work out whether used to keep fit or to enhance your boxing / martial arts skills.

These bags are ready to use and you can get straight to training instead of wasting your time on setting things up.

Within minutes, you will be able to punch it, kick it, elbow it as well as knee it as much as you can during each workout.

Let’s move on the full reviews! 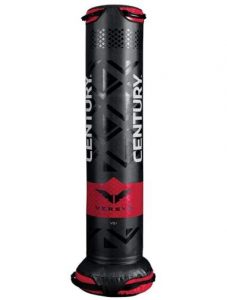 Great for: All levels

General Reviews of the Century Versys VS1 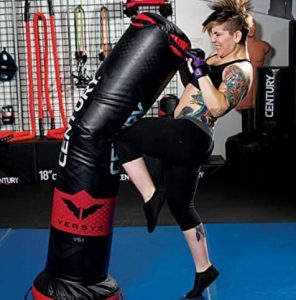 The Century Versys is supplied with a pre-filled base, saving you the time and the hassle of doing it yourself.

You can get a great work out by hitting it with your fists, knees and feet. If it is moving too much, simply put it into a corner of the room so that it moves less because the wall will stop it.

The bag weighs 110 pounds, meaning it will take medium levels of punishment.

In terms of value for money, durability and ability to take punishment then the Versys is an item worth purchasing.

To prevent damage to the bag, try not to punch too hard, only using fast and light kicks. If not treated harshly, it should be possible to get a great deal of use out of this punch bag.

Purchasing this bag is a means of improving your personal levels of fitness and if you persuade others to join in, it could also raise the fitness levels of everybody else in your family.

It is a more cost-effective way of getting fit than going down to a gym and paying membership fees. You can also hone or develop your fighting skills in the comfort of your own home.

Century Versys is a punching bag that has a key feature that makes it one of the most popular bags that can be brought.

Here is the lowdown on it’s strongest selling points. 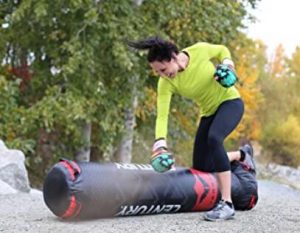 The Century Versys fight simulator is supplied with a pre-filled base, which saves you the time and the hassle of doing it yourself.

It is therefore ready to use and you do not have to waste any time setting the bag up.

The pre-filled base is filled with sand and the bag will not move when hit or kicked because the base is heavy enough to stay in place.

Having a weight of 110 pounds means that using the Century Versys VS1 will provide you with a thorough workout whether you use it to keep fit, or to improve your boxing skills.

It is a fair weight to attempt to move by hitting it with your fists, knees and feet.

The Century Versys VS1 has a diameter of 13.75″, and it has a height of 66“. It also has a weight of 110 pounds so that the bag will take medium levels of punishment.

This bag is tall enough and heavy enough not to be knocked over by heavy punches and big kicks.

However it is not designed to be used as a heavy punching bag and it does moves after it has been punched or kicked, though it will not topple over.

The foam is dense and able to take a medium amount of punishment. The vinyl shell is tough and protects the foam from getting damaged.

Having a foam filling means that the bag absorbs plenty of energy from blows, punches and kicks, though the bag will move after it has been hit. 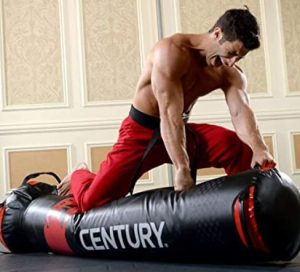 To put it simply, this punch bag is a great bag for combination strikes, and you can punch it, kick it, elbow it and knee it to your heart’s content.

It is probably better for youths to use for training, as adults need to keep in mind that it can only realistically take a medium level of punishment.

#6. For Stand-up and Ground Training

This punch bag is really good for stand-up and ground training, which provides a good cardio workout and martial arts exercise.

Use this product for combination strikes for perfecting those martial arts skills, or for throwing punches when practicing your boxing combinations of jabs and hooks.

Century Versys allows you to do stand-up and ground training at a reasonable level of intensity and will improve your levels of fitness.

For people that aim to get fit and to develop boxing / martial arts skills, then the Century Versys VS1 is a good punch bag to purchase.

#7. Great for All Levels

As a punching bag aimed at giving people a good cardio workout and developing fighting skills, this product is certainly a sound purchase.

With this punch bag, you are able to have a reasonable physical workout and it will allow you to work on and improve on your fighting skills.

Using the bag for work outs a few times a week will get your body into shape and improve your general levels of fitness and stamina.

Buying the Century Versys fight simulator is a means to improving your personal levels of fitness and if you persuade everybody to join in it could also improve the fitness levels of everybody else in your family.

It is a more affordable means of getting fit than going down to a gym and paying membership fees. You can also hone or develop your fighting skills in the comfort of your own home.

The Century Youth Vspar2 is designed to be used by pre-teenage children. There is no specific age limit to the Century Youth, yet a child of 7 or 8 who is above average height or weight would probably be too big to use it.

Parents should take into account that this stand-alone system has arms and legs, while it is more for children to learn boxing and martial arts techniques than it is about hitting it with real force.

It is an aid for learning fighting techniques, if you buy to be an out and out punch bug then you will be disappointed.

As a trainer aid for teaching younger children martial arts or boxing it works well depending on their age, height and weight.

It weighs roughly 15 pounds so that even a toddler could probably knock it over if they kicked or punched it hard.

A taller or heavier child could have to switch to training with Versys vs1 punching bag by the age of 7 or so.

A good feature of the Century Youth is that the arms and legs are capable of moving after a child hits, kicks or punches it.

Though the limbs of the system will not move as fast as a person reacting being hit, it does help children understand how opponents would react to their blows.

Having moving arms and legs makes the Century Youth different from the Versys as people old enough to use the latter would already know people would react to their blows or kicks in fighting contests.

It only weighs 15 pounds and stands at 46″ tall so even if its limbs caught a child, they would not be hurt by it.

The Century Youth system is light and only meant to teach younger children fighting skills and gets them ready to use a punching bag as they grow taller and stronger. 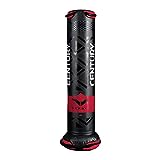 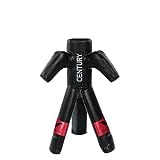 The Century Versys vs1 fight simulator bag is tall enough and heavy enough not to be knocked over by heavy punches and fast kicks.

The Century Versys allows you to do stand-up and ground training at a reasonable level of intensity and will improve your stamina level.

Acquiring a Century Versys is a way of improving your personal levels of fitness and if you can talk everybody to join in it may improve the fitness levels of everybody else in your family.

Alternatives to Century Versys vs1 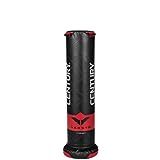 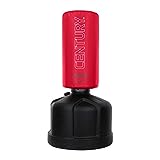